Automation keeps up with time. Based on the significant increase in efficiency with the automatic technologies introduction, they do not stop developing and improving. McKinsey provided the results of a recent study. According to this, 30% of entrepreneurs have automated at least one of their businesses. 59% of people surveyed said they used automated technology features for at least one business unit.

Automation has been able to help improve operational efficiency while decreasing costs and increasing revenue. This has the merit of numerous applications that cross multiple verticals.

The network-autonomous robots have gained momentum with the development of automation. They are vehicles that do not need physical control because of the sensors that respond to objects located in their path controlling them. These devices meet the expectations of investors and pay off quickly. It is worth noting that automation will bring maximum benefit when the consumer knows exactly where and how he can deploy it. To do this, it is worth delving into understanding some of the tasks that lend themselves to automation.

Here are some options for introducing automation technologies into your work environment:

Automation is especially relevant in large production facilities, where many dangerous tasks are undoubtedly repeated. To minimize the risk of industrial injuries, you need to provide automated machines with access to perform repetitive actions, like collaborative robots. Often these robots are the ones who start the process of automating an enterprise and are the first to be introduced into it. Nevertheless, even such a step can have a positive impact on business.

Additionally, using robots to move materials in a factory can also save a lot of money. After the automation of monotonous repetitive actions, the need for hired employees will disappear, so the cost of paying wages will also decrease.

A significant proportion of deaths happen due to accidents at work in the European Union. The danger comes from the wide usage of manual forklifts in warehouses. 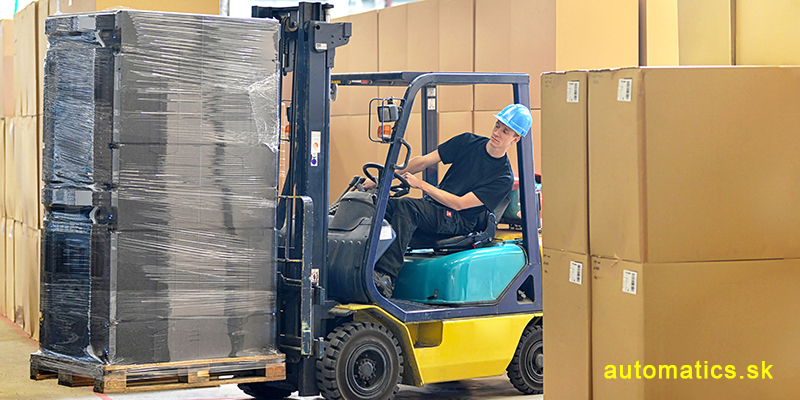 Such tragic events can be avoided by automating the monotonous, hard, and dangerous work. The productivity of work will increase if performed by autonomous robotic machines, which exceed the efficiency of forklifts by 6-8 times.

Check out a real-world example that is bringing future ideas to life today.

Imagine: A prime value carmaker has requested materials that are in a raw material replenishment production plant.

Realizing the risk of using forklift trucks, the automaker decided to replace manual forklift trucks with towing vehicles with their own conveyor system.

This replacement was not only an initiative to improve safety at work but also to improve work efficiency. Tractor units with material transport trailers deliver supplies to the conveyor on time. The supplies number on the conveyor is determined in advance. The autonomous tractor adjusts to this setting using built-in sensors that respond to a certain level of materials. When their number is reduced to the limit, they signal the software that it is time to replenish stocks. The software then sends the tug to carry out this mission.

Upon arrival at the restocking location, the software notifies the device to unload empty containers onto trailers. This unloading is carried out thanks to a conveyor system with a drive integrated into the autonomous loading and unloading apparatus.

Then the automatic machine returns to the material dispensing point to replace empty containers with full ones. This action involves automatic trailers and conveyors. At this time, the tractor itself recharging at its base until it receives a signal to replenish its stocks of materials again.

The advantages of the robotic tug over a conventional forklift are complete autonomy from human control and twice the efficiency. Thus, the tug can transport more materials in one go than the forklift.

Thanks to this, the automaker was able to place two workers in another area where automation is not possible. At the same time, he doubled the efficiency of supplying materials to the conveyor. It is also worth noting that automated technologies eliminate the human factor, providing 95% of the output.

Operations in warehouses and distribution centers

When using manual forklift trucks, there is a risk of damage to goods or materials in transit. That often happens when a person is driving the machine. The driver is merely unable to see or feel the load he is pulling on the forklift. There is also the possibility of incorrect product placement, which will lead to reporting and registration failures. In its turn, it will negatively affect the efficiency of the warehouse.

The inefficiency and insecurity of work can be eliminated thanks to one innovation only - warehouse automation.

An automated forklift can become an autonomous solution, which will be used to load materials onto a tractor with a trailer or several trailers, which will be able to transport 6-8 pallets at a time.

Another undeniable advantage of an automated loader is that it can easily unload pallets onto high shelves and racks that are physically inaccessible to people.

The AMR software controls all of the above actions. Its distinctive feature is that it can drive vehicles in warehouses, building an individual route depending on the task performed by the device. Besides, the software can identify dangerous obstacles on the way and plot a new safe path. 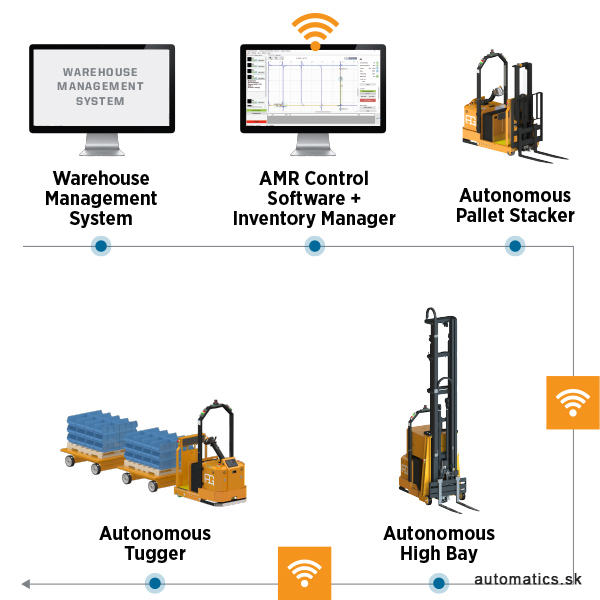 The advantage of a stand-alone end-to-end system is low cost while providing the same functionality as traditional automated storage and retrieval systems (ASRS). At the same time, the installment does not take up much space. That is why it is the ideal solution suitable even for the smallest businesses.

These installments pay off in a short time since they eliminate the loss of time and the issuance of fines for errors when accepting goods to the warehouse.

Material towing is possible even over long distances. Check out a real-life example below.

A global outdoor tool manufacturer decided to build and equip a distribution center to help improve unloading and loading operations.

Together with the team, the manufacturer figured it would take a forklift fleet and a few more workers to move the materials over three-quarters of a mile. However, this need was eliminated when they thought about installing autonomous towing robots. Besides, the efficiency of this system is enhanced by the fact that the automatic trucks can work even after the end of the working day at the distribution center.

Autonomous tractors can make up a train of four trailers. These trains are especially useful for transporting large loads because, by carrying up to 8 pallets of 10,000 pounds of the finished product, they minimize the number of trips and miles traveled per day.

The value of autonomous tractors is also given by the fact that they can stop at the linear group members' request. In this way, team members are also able to make their work easier by simply transporting raw materials from the delivery area to the workgroup, without calling in a special tug, but using it when it performs another task, moving along its route.

Used wisely, you will reap the benefits immediately

Technological advances have made warehouse automation more affordable. Now it is possible to implement robotics in them, which will not change the infrastructure of the building, and at the same time will perform many warehouse tasks. Today the introduction of robots into a warehouse is not only a feasible goal but also a very desirable one!

Business efficiency can be increased by introducing automated technologies into it. They will replace personnel in heavy, monotonous, and dangerous work, redirecting them to more complex tasks the robot can’t handle. Based on the foregoing, it is safe to say that your business will benefit from automation to the maximum!